Earlier this year, a woman living in the Washington Heights area of New York City filed a lawsuit against the Sugar Hill Project, the impressive $84 million subsidized housing building located in nearby Harlem. Completed in 2014, the mixed-use facility was designed to be an affordable living space for one of New York’s poorest communities, yet the development had one major issue that belied its high-minded, revitalization goals: it was getting people sick.

Last summer, more than 50 people in the surrounding area were hospitalized resulting in 2 fatalities, all related to Legionnaire’s Disease. The outbreak was connected to the housing project’s cooling tower, which has since been shut down. If not properly filtered, cooling towers can instigate microbiological growth that can lead to health problems, such as those caused by Legionella.

As an integral component of many cooling systems, cooling towers are typically used in industrial applications and in large commercial buildings to extract heat from a process or building system through evaporative cooling. Cooling tower systems operate most efficiently when their heat transfer surfaces are clean, but by design, require a large air-water interface to obtain this cooling and thus the system is subject to four major water treatment concerns: corrosion, scaling, fouling and microbiological activity.

As waterborne deposits collect, they reduce heat transfer efficiency which can be very costly. Traditionally, the deposits are controlled by system blowdown, which increases wastewater discharge as well as concerns about water usage due to drought and environmental threat. As a result, cooling towers are being operated at higher contaminant concentrations, which only compound the problem.

Addressing it involves full flow and side stream filtration. Filtration reduces blowdown, energy consumption and the kinds of fouling that leads to harmful microbial growth. Full flow filtration uses a filter installed after the cooling tower on the discharge side of the pump and is designed to continuously filter all of the recirculating system water. Side stream filtration continuously filters a percentage of the flow which significantly reduces system footprint, capital investment and operational cost — all very important considerations for affordable housing budgets. Additionally, these systems can be cleaned offline without shutting things down, eliminating the need for planned downtime.

There is an array of filtration technologies available in the market, but few achieve adequate efficiencies. Screens require frequent backwash which increases water discharge. Hydroclones suspend solids through centrifugal force which can leave smaller particles behind. Sand filters can offload sand into the system. Bag filters have limited surface area, requiring large vessels to address flow requirements. All address some of the costs associated with inefficient cooling tower filtration, but in many cases introduce new ones.

Cartridge filters, on the other hand, address all costs: environmental, operating and health. They’re a disposable medium that exists in both non-pleated (lower cost, generally lower efficiencies) and pleated designs (high surface area) and offer high retention down to sub-micron levels, thus effectively addressing bio-burden issues. Some newer designs in the market such as large diameter offer further improvements in flow rates while reducing operating costs.

In March, the New York City Council voted to reform the city’s cooling tower inspection protocol requiring the city’s Department of Buildings and Department of Health to present an annual report of cooling tower inspection results to the city council and post the results online. Cartridge filtration could play a critical role in those results, as well as the well-being of the surrounding Harlem and Washington Heights communities. The entire story is yet to be told, but it deserves a happy ending. Especially when one considers that the Sugar Hill Project has been designed with a Children’s Museum of Art and Storytelling at its base.

•Absolute retention ratings from 0.5 to 70 microns

Graver Technologies, LLC introduces TurboGuard, its technically improved 6 inch (152 mm) high-flow filter for the utility market. Graver is the world’s largest supplier of condensate system filters and components and has been manufacturing precoat and non-precoat septa for condensate systems for more than 50 years. Graver is the consistent technology innovator with more than 40 patents and numerous technical advances for condensate and high purity water applications.

Graver’s TurboGuard High Flow Filter integrates a number of improvements over currently available elements. With the most experience of any supplier in condensate applications, Graver can access more than 50 years of experience when improving fundamental filtration in condensate and high purity water applications.

FDA compliance
All polypropylene material used in manufacturing complies with the regulations of the FDA title 21 of the Code of Federal Regulations Sections 174.5, 177.1520, and 177.1630, as applicable for food and beverage contact.

TefTEC cartridge filters are constructed with naturally hydrophobic PTFE membrane and polypropylene support layers and components. The HIMA retentive PTFE membrane offers superior hydrophobicity and water intrusion resistance compared to PVDF and polypropylene membranes, and the cartridge construction offers a cost-effective alternative to all fluorocarbon filters. TefTEC filters are ideal for gas/vent applications and the filtration of aggressive chemicals and solvents.

An economical, disposable, filter element that can be used in a wide range of applications. The Crystal MBF depth filter is constructed of 100% polypropylene media for chemical compatibility with a variety of process fluids. The unique Crystal Core prevents collapse even at elevated temperatures.

Flowrite “TB” Series Tank breather filters are fabricated from 304-Stainless Steel. They are designed for a maximum operating pressure of 100 kPa at80ºC, depending on cartridges fitted. The “TB” Series housings feature Flowrite’s well proven centre post and nut design. Cartridges are located by their own end seals and a securing plate to which is attached a perforated stainless steel shield which allows free passage for the entering and exiting air during tank emptying and filling cycles.

The cartridges have double ”O” rings which give a perfect seal between cartridges and housing, thus eliminating any possibility of bypass. The practical and sturdy design of these housings allows quick and convenient cartridge change out of the 9¾” modular length filter cartridges.

Flowrite “TB” Series filter housings are available in one, two, three & four cartridge configurations to minimize pressure drop, and thus protect the tank from differential pressures while emptying or filling. The inlet port can be threaded or flanged to your specifications, and the unit is supplied in electro polished finish suitable for most semi and non-sanitary applications.

The housing should be used in conjunction with hydrophobic cartridges with a micron rating to your specification, which are also available from Flowrite

Flowrite “TB” Tank Breather filters are custom designed and made to order. Thus, when ordering or enquiring, please specify:

Once this information is available, a detailed, no obligation quotation for suitable housings and filter cartridges can be provided.

The second stage inner core is composed of a bi-component polypropylene and polyethylene fibre to provide fine particle retention. This unique design provides a true graded density filter cartridge that offers a marked increase in useful life and dirt capacity.

In addition, the rigid nature means there is no flexing of the cartridge and greatly reducing media migration and particle unloading.

Graver High Flow Series filters feature a larger geometry to handle higher flows with fewer filter elements. The result is much faster, easier filter changeouts. In addition, the inside to outside flow allows for excellent dirt holding capacity, extending the time between filter changeouts.

Its technically improved 6 inch (152 mm) high-flow filter for the utility market. Graver is the world’s largest supplier of condensate system filters and components and has been manufacturing precoat and non-precoat septa for condensate systems for more than 50 years. Graver is the consistent technology innovator with more than 40 patents and numerous technical advances for condensate and high purity water applications.

Graver’s TurboGuard line of filters are manufactured in the USA at Graver Technologies manufacturing plants, under an ISO-9001 (2000) quality system.

Graver’s TurboGuard High Flow Filter integrates a number of improvements over currently available elements.  With the most experience of any supplier in condensate applications, Graver can access more than 50 years of experience when improving fundamental filtration in condensate and high purity water applications. 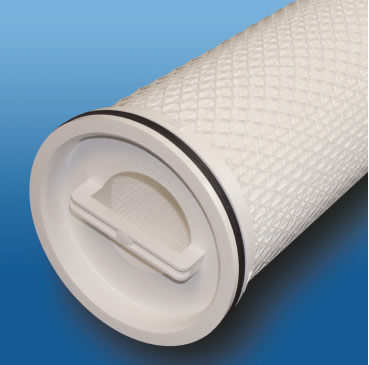